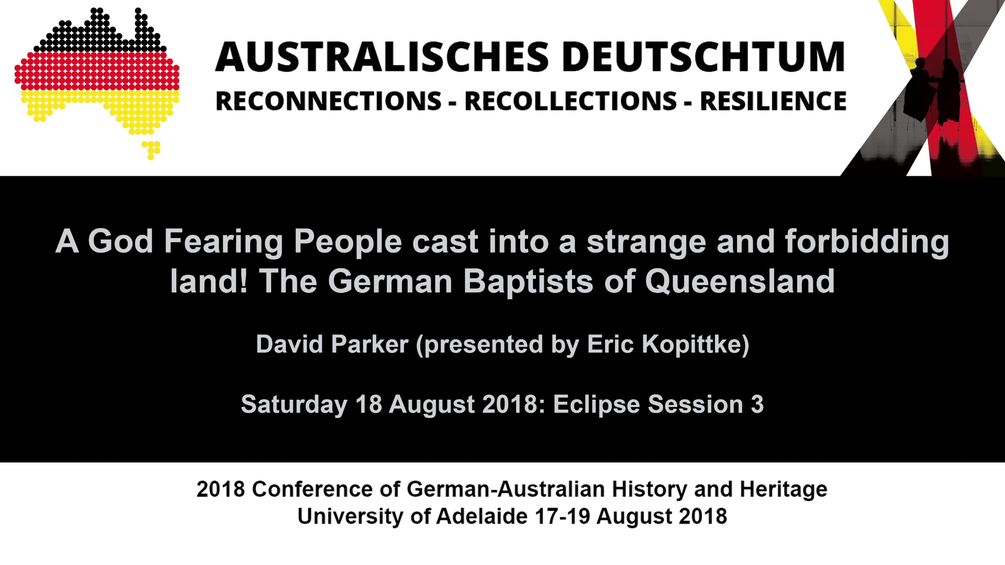 A God Fearing People cast into a strange and forbidding land! The German Baptists of Queensland

Video of the presentation by Eric Kopittke (presenting for David Parker) from the 2018 German-Australian History and Heritage Conference in Adelaide.

At its peak around the end of the 19 century, German migration contributed up to 10% of the population of Queensland. Of these, a significant group were, or become, Baptists, and they were concentrated in the area north and west of Ipswich. With roots of their churches developing first from the 1860s, they eventually formed their own denomination; after the mid-1920s they merged with their ‘English’ counterparts who were established first in 1855 and organised themselves in 1877.

During their first seventy years, the German Baptists showed themselves to be a God-fearing more or less self contained community, concentrating at first on their survival and then on their growth but with an eye on support of Christian work much farther afield. Afterwards, they contributed a solid core of faith and commitment to the larger denomination which has had an impact well beyond their numbers.

This paper traces the origins, development and character of this important continuing component of Queensland Baptist history and life.

Rev Dr David Parker, BD, MA, PhD, is an ordained Baptist minister (retired) who directs the Baptist Church Archives, Queensland. He has been researching, writing, visiting and advocating for German Baptists for more than 30 years.

He is the author/editor of numerous publications relating to Baptist identity, thought and history, including Pressing on the With Gospel (2005, 150 anniversary of Baptists in Queensland), Strange Bedfellows: Rev. Charles Stewart, Brisbane's First Baptist Minister, and the United Evangelical Church, Brisbane (1998); James Voller: Pioneer Baptist Minister of Australia (1997);‘A True Pastor’: The life and ministry of William Higlett (2002) and Women who made a Difference (2009).