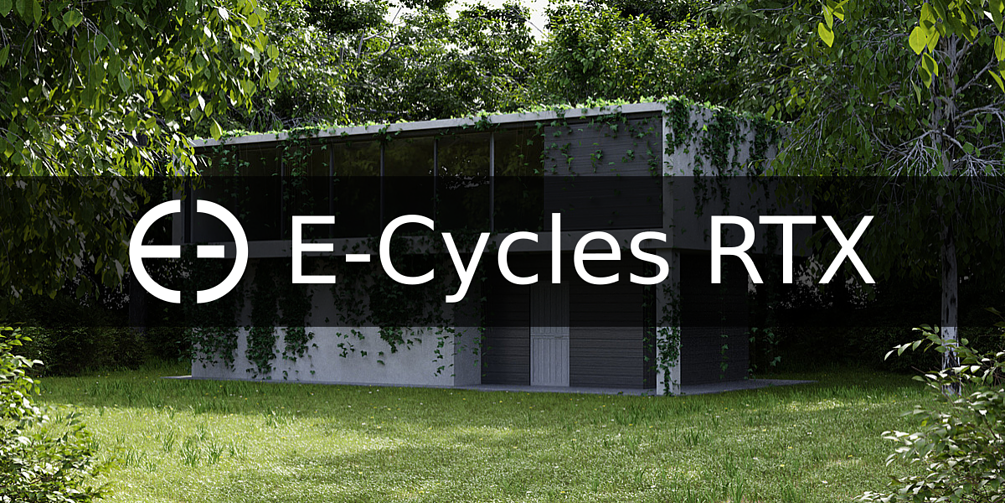 E-Cycles RTX offers 2x faster rendering on average for OptiX. It's the perfect version for Nvidia RTX cards. It also includes the standard E-Cycles with CUDA support for optimal performance on every project.

The fastest and easiest photo-realistic renderer for Blender:

Extremely fast rendering, right out of the box

Thanks to code optimizations, rendering with NVidia GPUs and E-Cycles is equivalent to doubling the number of GPUs in your machine, on average.

What’s more, thanks to a new option called "Persistent Data", for fly-through animations where only the camera moves, E-Cycles only needs to do the pre-processing step once for all frames. In the example above, rendering takes just 3 seconds per frame on a single GPU. In this case, the persistent data option saves 7 seconds of pre-processing per frame.

State of the art denoising technique

E-Cycles AI-Denoiser requires between 4 and 10 times less samples than other AI-based denoisers to get a similar level of quality.

Using less samples for the same quality means a proportional speed increase for your renders – that’s on top of the ‘regular’ speed increase E-Cycles offers on NVidia cards. For comparable image quality, with both the regular speed increase and the new AI-Denoiser, you can get up to 25x faster rendering. And it's a one click setup!

2 engines in 1: Render Profiles for easy usage and 3-click optimizations

For still images, there’s no need to convert all your materials and assets to export to a path tracing engine – just simply select a higher quality preset.

Premiere lift group (a company that works with Zaha Hadid and Porsche, among others) switched from Unreal Engine to E-Cycles for their still image renders and animations.

Animations by Ryan Plunkett at Premier Lift Group. More renders are available on their website, all made with E-Cycles.

Light Groups in the viewport for real time lighting setup

When you tweak lights in the viewport, it will restart at 0 samples by default each time you change a parameter. But when using E-Cycles and light groups, you can tweak your lighting setup while the viewport continues to render, offering you very fast, high quality previews.

When you tweak lights in the viewport, it will restart at 0 samples by default each time you change a parameter. But when using E-Cycles and light groups, you can tweak your lighting setup while the viewport continues to render, offering you very fast, high quality previews.

New in E-Cycles 2021: SSAA for crisp textures and detail-rich denoising

Viewport denoising is awesome, but there are times when it washes out the fine details in textures, hair and dark areas. With SSAA, E-Cycles preserves more details and renders faster at a comparable sample count.

How does the speed-up work?

Thanks to code optimizations for efficient memory access and better usage of the massive core count of GPUs, using E-cycles is on average like doubling your GPU(s) count. You can just hit render and immediately benefit from up to 2.5x faster path tracing.

You can use these optimizations to either A) keep the same quality and halve the time required to produce images or B) to render with higher quality settings using your previous time budget.

Some new optional features allow up to 41x faster path tracing. Thanks to a new preset system, you can quickly switch between preview renders done in seconds and high-quality photorealistic renderings. Does your client want more realism? With just two clicks to select a profile, you can hit render and you’re done. Video tutorials are included to learn how to get the most out of E-Cycles and optimize your workflow.

On top of the regular updates, here is the changelog from January 2019 until now:

What the artists say

Animations by Ryan Plunkett at Premier Lift Group. More renders are available on their website, all made with E-Cycles.

What about OpenCL and CPU rendering?

Only NVidia GPUs are officially supported.

For AMD GPU users, OpenCL is currently only around 20% faster, and is still a work in progress. CPU rendering is the same as in the official Blender release. However, you can still benefit from the new AI denoiser, render profiles, dithered sobol and more for up to 10x faster rendering on all platforms and with similar quality. Features like Light Groups, clay and AO rendering etc. also work on CPU and OpenCL and can massively speed up your workflow.

If you want to use E-Cycles with CPU or OpenCL, I’ve collected some user tips in the documentation to get the best experience possible.

*The Linux version of official Blender builds is faster than the Windows one. For E-Cycles, all systems have about the same speed. For this reason, the speed increase may be relatively small on Linux – generally about 10-20%. This means the overall mean speed increase should be around 1.7x instead of 2x.

** For CPU rendering, any MacOS version supported by Blender will also work with E-Cycles. For GPU rendering, please check the official Blender 2.90 builds first to see if your GPU is supported for Cycles rendering (in edit-> preferences -> system -> device). For CUDA rendering, MacOS Mojave is required. Blender 2.91 dropped CUDA support for Mac, E-Cycles 2.91 still supports it.