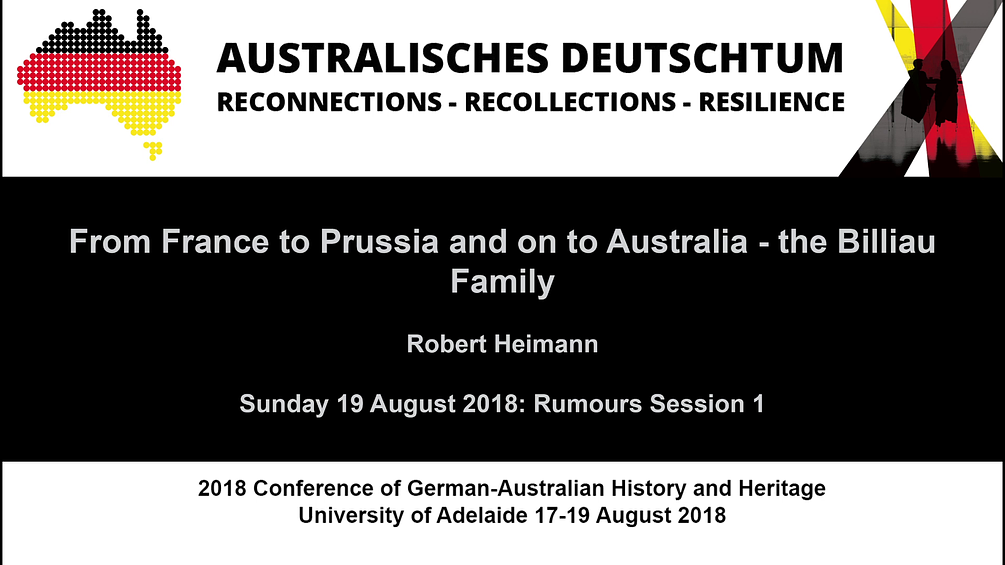 From France to Prussia and on to Australia - the Billiau Family

The Billiau Family came to Queensland, Australia, in the 1860s from the area called Uckermark in Prussia, Germany. This area in the northeast of the present day German state of Brandenburg has experienced a surprisingly high level of migration, both incoming and outgoing, among them the two biggest, respectively most important, phases were the incoming of French Huguenots at the end of the 17th century and the emigration to the US and Australia during the 19th century. The Billiaus were part of both waves, having immigrated to Brandenburg from France via Pfalz in the 1680s and having left for Australia almost 200 years later. Thus this family can be taken as one of the best examples for showing how political and historical developments shaped migration processes in Europe during the course of two centuries.

A native of Düsseldorf, Germany, Robert Heimann was born in 1968. He started researching the history of his family at age 13 and since then continues to find new additions to his family tree literally every day. He speciallizes in all aspects of emigration and immigration within his family and has done extensive travel through various countries specifically for genealogical research, e.g. Australia, Belgium, Canada, Czech Republic, Estonia, Finland, France, Italy, Latvia, Luxemburg, Netherlands, New Zealand, Norway, Poland, Spain, Sweden, Switzerland, United Kingdom, United States of America. He has also done client consultation and is a member of various genealogical organizations in Germany and abroad.

Robert Heimann is currently living in Austria and holds a professorship for oratorio at the University of Music and Performing Arts in Graz, Austria.