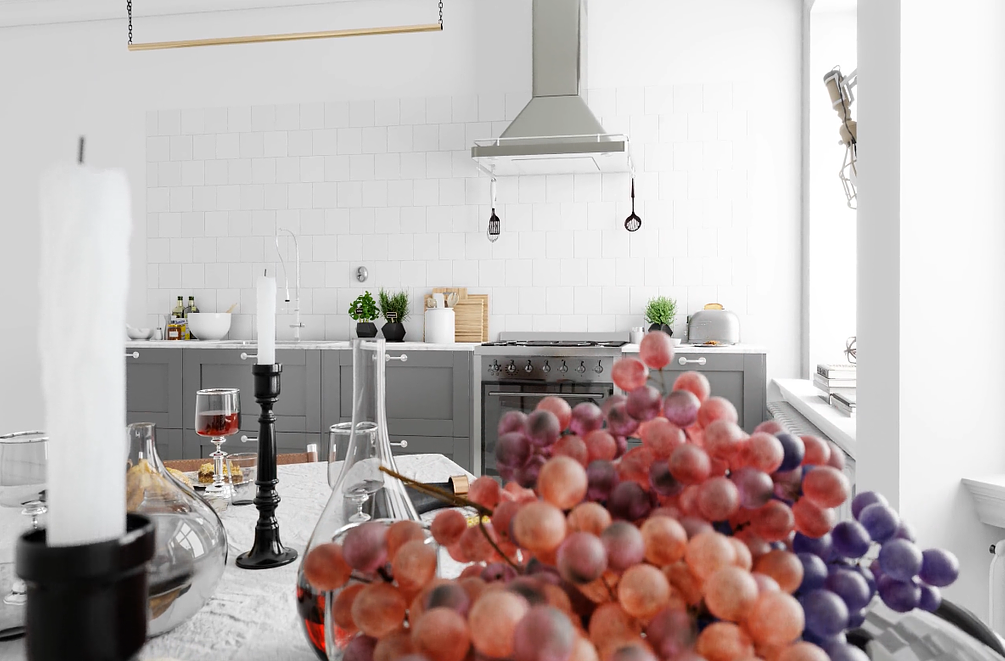 Path tracing gives very good results but is often slow, has a lot of settings and requires expensive hardware. Render farms require long uploads and downloads, are limited to some Blender versions and are expensive in the long term. Real-time renderers are fast but have a limited quality level regarding lightning and complexity, they also require a lot of manual tricks, which brake when the scene is changed, sometimes even with a simple camera move. They also require to tweak the scene when coming from Cycles.

E-Cycles is fast and simple to use. Out of the box, it's most of the time like doubling your GPU power. So if you have a GTX 1070, you get 260€ worth of GPU power. By selecting a render preset, and using the new AI denoiser, you can even get much more with only 3 clicks.

E-Cycles is a very optimized version of Cycles when using CUDA GPUs. E-Cycles is flexible and 100% compatible with Cycles, allowing to use all your libraries and add-ons as is.

Thanks to code optimizations (for efficient memory access and better usage of the massive core count of GPUs), using E-cycles on average is like doubling your GPU(s) count. You can just hit render and already benefit from 1.5x to 2.8x faster path tracing with the same image quality.

Some new optional features allow up to 15x faster path tracing. Thanks to a new preset system, you can quickly choose between good looking renders done in seconds and high-quality photorealistic renderings. Does your client want more realism? 2 clicks to select a profile, hit render, done.

Tibor Nyers from Boostclock.com made an interior render in 5 seconds per frame including preprocessing, rendering, compositing and file saving: https://blenderartists.org/t/e-cycles-faster-rendering-for-cuda-gpus-and-better-ai-denoising/1139717/898

With E-Cycles you get support and weekly builds based on the latest and greatest Blender. E-Cycles is available for Windows, Mac and Linux*. Both versions are perpetual license and will give you access to all the 2019 updates. If you prefer monthly subscription, you can get 2.8x here: https://gumroad.com/l/vkTeQ

- save a lot of time and money by rendering faster with the same quality. The mean speed-up for the path tracing phase is around 2x out of the box when using CUDA GPUs. Thanks to a new sampling strategy, the noise level is even lower at same sample count compared to vanilla Cycles

- render very fast fly-through (2.79x only for now) by computing the pre-processing phase only once when doing fly-through, where only the camera moves

- or improve your renders quality while rendering in the same time as before, using for example more bounces and caustics

- or go to the next step with videos and VR, thanks to new presets to render up to 15x faster.

- render very clean preview images thanks to a new AI denoiser that gives great results on still images starting at 16 samples. Really helpful for quick feedback with your clients

- save human time by using auto tile size and quick quality presets. Shorter setup time and faster rendering means it's easier to adapt to changes and deliver projects on time. E-Cycles can save you on tight deadlines.

E-Cycles is easy to use

Render faster out of the box with the same quality:

Or boost the performance further with 2 clicks to select a preset, here for example 4x faster:

On top of the weekly updates, there is one optimization or new feature per month planned (= 12 for 2019). Here is the changelog since January until now:

- up to 5% faster rendering in some scenes

- new option based on the scrambling distance patch from Lukas Stockner, allows to render up to 40% faster (on top of existing speedup)

- uses half the memory when denoising with all passes (transmission and SSS included).

- new AI denoiser addon which can now generate denoising node trees in one click, even in complex scenarios and with very high quality.

- E-Cycles 2.8x got 2 improvements ported from the 2.79x branch. Memory usage is reduced in most scenes, allowing to fit bigger scenes in the GPU memory. Rendering is also around 10% faster compared to the April update.

- both the 2.8x and 2.79x versions can render up to 2x faster when using the old denoiser (the one from Blender) on multi-GPU setups.

Use all your add-ons

E-Cycles is 100% compatible with Blender and is synced every week with the official version. It means you can use all your beloved add-ons for the version you choosed (2.79x and/or 2.8x). Here is an example from Alleyne Studio using Graswald and Pro-lighning skies with E-Cycles: https://www.youtube.com/watch?v=PuipGN6m-p4

Alleyne Studio, you can see several screen recording of him using E-Cycles on his channel https://www.youtube.com/channel/UCKUhZgvE_RqZm9ImzKQ0RjA

Flavio Della Tommasa "Obviously in terms of performance I believe the data speak for themselves. On 8 images, 2h each, I lost a day of calculation. With E-Cycles, in just over 2 hours I solved everything." https://blenderartists.org/t/e-cycles-faster-cuda-rendering/1139717/116

"Impressive speed-ups", "support is good, all issues (specific to E-Cycles build) I have found and reported were quickly fixed" https://blenderartists.org/t/e-cycles-faster-cuda-rendering/1139717/79

"The Speedup is amazing" https://blenderartists.org/t/e-cycles-faster-cuda-rendering/1139717/60

Walk-through of some Evermotion Scenes using the new AI denoiser:

Rendered in 23seconds per frame on a single 1080Ti:

Here is a comparison of Blender and E-Cycles made by Tibor from Boostclock.com, the E-Cycles optimisation was as simple as selecting a profile, activate persistent data and AI denoising and hit render:

My name is Mathieu, I work on Cycles since 2015 (my first patch here https://developer.blender.org/D1530) and already have several patches in official Blender. Each improvements from E-Cycles will be proposed to the Blender Foundation one year after it's respective release date.

What about OpenCL and CPU?

Only CUDA GPUs are officially supported.

For AMD GPUs users, OpenCL is only around 20% faster at the moment and is still being worked on. CPU is like in official Blender. You can still benefit from the new AI denoiser on all platforms. You can see the AI denoiser compared to other ones here and here or a 7sec render of the BMW scene with AI denoising here. Here you can see an AMD user using E-Cycles successfully too.

If you want to use E-Cycles with CPU or OpenCL, I gathered some user tips in the documentation to get the best experience possible.

About the 2.8x version

The 2.8x version is kindly offered as is to ease the transition to newer version of Blender. There is no support nor warranty for it. It is based on Blender 2.8, which is still very unstable and known to have more than thousand bugs. Using this build has the same advantages (new features) and inconvenient (less stable and uses more memory than the 2.79 version) as the official 2.80 versions. Bugs found in the official version of Blender are to be reported to the Blender Foundation. If you prefer a stable and fast experience, with a huge add-on ecosystem, I recommend using the 2.79x version of E-Cycles. It also has some extra features for fast fly-through visualizations where only the camera moves, especially useful for archviz and product advertising. If you switch from Blender 2.79 to E-Cycles 2.8x, there are 2 big known bugs in Blender 2.80 that can lead to slowdowns when using adaptive subdivision and/or denoising. E-Cycles 2.79x works properly.

Support is only for the E-Cycles parts. Bugs found in buildbots are to be reported to the Blender Foundation on developer.blender.org

Scenes have to fit in the GPU memory for the speed-up to work properly. Since some months, Blender supports rendering scenes on GPU while using system memory to some extent. While E-Cycles allows this too, the speed of the system memory is too low and your GPU will just wait for datas to arrive. In most cases, scenes requiring more memory than available on the GPU should be rendered on CPU

due to a new bug in Blender on multi-gpu configurations, only the AI denoiser on 2.79x is officially supported when using multi-GPU configurations. The non-AI-denoiser is slower with multiple GPUs in all versions. It’s still faster than the official builds. Single GPU configurations work properly. A fix for the above-mentioned bug is being worked on.

E-Cycles produces higher quality samples (lower noise at same sample count). At comparable noise level, E-cycles is around 2x faster, but at low samples (under 64) you may have to tweak your sample count manually. Earlier version of E-Cycles had automatic sample count for such case, but it was decided after feedback from users to let the user decide if they want a cleaner render or a faster one in this rare case.

While many user report good times with CPU+GPU on E-Cycles, only CUDA GPU rendering is officially supported.

- NVidia Geforce 700+ (up to latest RTX cards) with drivers supporting Cuda 9 or more (to be precise, any card supporting sm_30 which was released in 2013 or more) to benefit from the out-of-the-box speedup. AMD cards can render faster using presets and also have a small speed-up out of the box, around 10-20% but are not officially supported yet.

- For Mac users wanting to use the CUDA speed-up, you need a version of OS-X which has CUDA support. Mojave is known to work properly. For other versions, try an official Blender build first from https://www.blender.org/download/. If it works, then E-Cycles will also work.

*The Linux version of official Blender builds is faster as the Windows one. For E-Cycles, all systems have about the same speed. So the speed-up may be relatively smaller on Linux by about 10-20%. It means the mean speed-up should be around 1.7x instead of 2x.