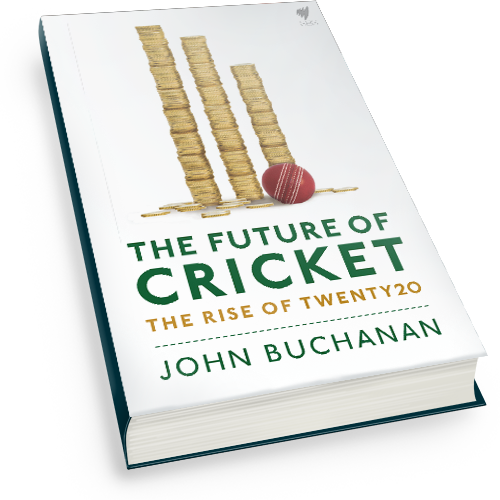 The Future of Cricket - John Buchanan

When New Zealand wicket keeper-batsman Brendon McCullum walked out to open the batting for the Kolkata Knight Riders against the Royal Challengers Bangalore on April 18, 2008, in the first match of the inaugural Indian Premier League, the cricket world watched with anticipation and curiosity. How would the world take to the Twenty20 format and the IPL? Would local fans support privately-owned franchises full of foreign players?

Cricket is a traditional game. With the odd exception it has remained largely unchanged for nearly a century and a half. The Bodyline series and the World Series Cricket revolution changed the game in their times; the IPL has the potential to usher in even more significant changes to the way the game is played. That’s the reason I was so keen to be involved.

T20 had proved successful in domestic competitions and as one-off internationals but the IPL was an undertaking – and a gamble – on an entirely different level. The franchise system was a departure from traditional state, county, provincial or national representative cricket: privately-owned teams would represent cities, with players selected via auction from all over the world. The IPL and its franchise owners had invested hundreds of millions, if not billions of dollars in a speculative venture that had the potential to either fall flat on its face or change the face of cricket.

So much depended on the players. Professionals, they were being handsomely rewarded for their time – some extremely so – but the jury was still out as far as T20 was concerned: was it cheap, sideshow entertainment or did it have a place at the table alongside the more traditional forms of the game? How would crowds – and for that matter, players – respond?

One of the greatest appeals of T20 is the speed at which it is played. Whereas a Test match can take five days to provide an answer and even a 50-over match up to eight hours, we had our answer in less than an hour and a half.

Eighty exhilarating minutes to be precise, was how long it took McCullum to smash an unbeaten 158 from just 73 balls, including an incredible 13 sixes. The crowd was delirious, TV viewers enraptured, the owners thrilled. The question had been answered: this was the future of cricket.