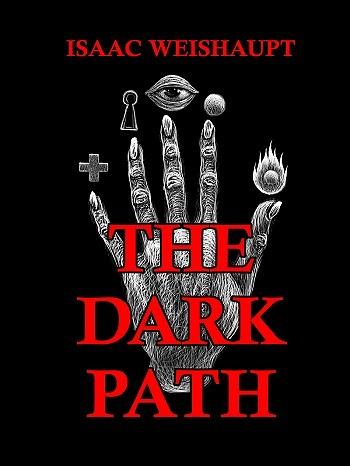 THE DARK PATH by Isaac Weishaupt

LIMITED TIME OFFER: Get THE DARK PATH for FREE by joining the author's Patreon "IW Supporter" team! Sign up at Patreon.com/IlluminatiWatcher

THE DARK PATH is considered Isaac Weishaupt's magnum opus; a result of many years delving into the recesses of occult dogma from the approach of open-minded rationalism. Isaac's journey started with an attempt to separate religion from conspiracy theories, but the agenda clearly showed a connection. The question to be considered is if the agenda of the "Illuminati" overlaps with the tenets of the "occult," and whether or not there is an "evil" influence at play...

This work carves out a distinction between witches, satanists, magicians, occultists and the New Age, while proving the connected desires to usher in Crowley's Aeon of Horus as the New World Order. Using concepts from Gnosticism, Freemasonry, Alchemy, Kabbalah, and ceremonial magick; Isaac explains Hermetic axioms such as "As above, so below" from which many occultists subscribe to mental emanations that can be used to create reality.

They are all part of the Evolution of Consciousness that is being used to push mankind down the path of obliteration through transhumanism, which promises the alchemical pursuit of immortality. NASA, Adolf Hitler's Nazis, and Ancient Alien theorists are using Darwin's theory of evolution to assert the superiority of alien life forms. A coordinated effort of science-fiction beliefs is being conducted to put us in direct contact with these demonic deceptions.

The unsuspecting masses will be shocked to find out the "Illuminati" savior of Lucifer and his desire to put us into the transhuman digital matrix; ultimately destroying God's creation by "evolving" us into the next entity: a globally connected digital form of consciousness.

Isaac shares personal tales of Faustian bargains as well as experiences with radio shows that helped confirm his world view of the frequency battle for our souls; and this book is a testament to those observations.

Website publisher of IlluminatiWatcher.com and top 5% Amazon author; Isaac Weishaupt has been on the leading edge of conspiracy theories surrounding the elusive “Illuminati” and its infiltration of the entertainment industry. Using examples of familiar pop culture and works of entertainment, Isaac has been speaking and writing about the occult from a unique perspective that seeks to understand the big agenda while helping others along the way.

Isaac has been a featured guest on Dave Navarro’s “Dark Matter Radio,” BLACKOUT Radio, Richard C. Hoagland’s “Other Side of Midnight”, SIRIUS/XM’s The All Out Show, The HigherSide Chats, Freeman Fly’s “The Free Zone”, Mark Devlin’s “Good Vibrations”, VICE, COMPLEX Magazine, and many more radio shows and podcasts. His fresh perspective and openly admitted imperfections promotes the rational approach to exploring these taboo subjects and conspiracy theories.

*ANOTHER OPTION: If you're looking for the author-signed paperback (which includes the PDF), go here: https://gumroad.com/l/mBQqb

**There's also an option to get THE DARK PATH as a free download if you become a Tier 1 supporter on Patreon.com/illuminatiwatcher (which will also give you bonus content from the Conspiracy Theories and Unpopular Culture podcast!)