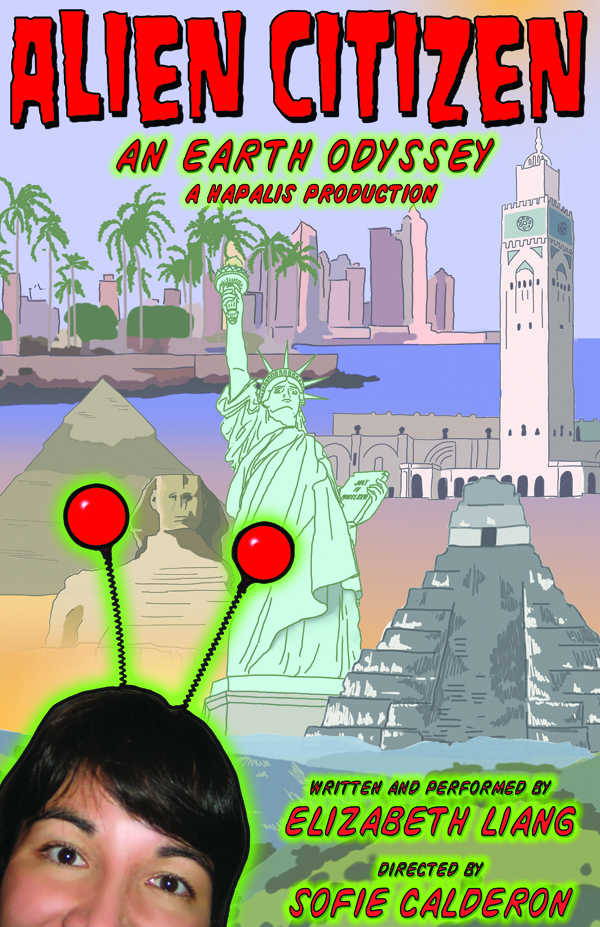 ALIEN CITIZEN: An Earth Odyssey is the award-winning film of Elizabeth Liang's internationally toured, funny and poignant one-woman show about growing up as a dual citizen of mixed heritage in Central America, North Africa, the Middle East, and New England. ("It's a world tour no one should miss," Off-BroadWay Review.)

DVD Special Features not included: audience Q&A with the director and producer/writer/ performer; interviews of expat family members; deleted scenes from the original stage production. Purchase the DVD of the film with Special Features here.

Elizabeth Liang is a Third Culture Kid (TCK) or Global Nomad. TCKs are the children of global educators, international business people, diplomats, missionaries, the military, and more—anyone who grew up outside their parents' culture(s), who doesn't feel full ownership in any culture, and whose sense of belonging usually comes from people with similar backgrounds or interests. Liang weaves humorous stories about growing up as an Alien Citizen abroad with American commercial jingles providing her soundtrack through language confusion, first love, "racial ambiguity," culture shock, friendship, Clark Gable, sexual harassment, and sandstorms…

Our protagonist deals with the decisions most Global Nomads have to make repeatedly: to adapt or to simply cope; to build a bridge or to just tolerate. From being a Guatemalan-American teen in North Africa to attending a women’s college in the USA, Alien Citizen reflects her experience that neither one was necessarily easier than the other. How does a young girl cope as a border/culture/language/religion straddler in country after country that feels "other" to her when she is the “other"? Where is the line between respecting others and betraying yourself?

Humor is a great survival mechanism! And friends make all the difference.

ALIEN CITIZEN: An Earth Odyssey aims to both entertain: "an amazing amount of humor, aplomb and hope..." (Williams College Record) and educate: "it was profound for all of us" (Ruth Van Reken, author of Third Culture Kids: Growing Up Among Worlds). It is the only intercultural solo show that highlights the experiences of being multiracial, bi-national, multilingual, nomadic, and female—living among many different worlds—all at the same time.

Although the narrative is mostly in English, Liang speaks five languages in the film and depicts over 30 characters (including herself at different ages) living in Guatemala, Costa Rica, USA, Panama, Morocco, and Egypt. Alien Citizen illuminates a slice of the human experience that is directly borne of worlds colliding, intermingling, or circumventing one another. Alienation and the search for identity, as well as the sometime refusal to search and learn, weave thematically through the narrative.

The stage production has toured in 12 US states and four continents. Go to aliencitizensoloshow.com for more information on the play, film, and workshops on creating a solo show or memoir.

"I’ve never seen myself as a third culture kid represented so clearly on any screen, even though Liang and I lived in different places and have different racial backgrounds. Once more for those in the back: representation matters...Told in beautifully written and poignantly acted vignettes about her life, Liang’s show is dynamic and vivid...I found myself nodding along to so many of Liang’s anecdotes and analyses about her experiences, even though we have a vastly different catalog of places we are from and lived...Alien Citizen is heart-wrenching and painfully honest, but it is also really funny...her charismatic performance works as both a play and a movie. This is no small feat. Sofie Calderon’s directing is spot on...Alien Citizen will help anyone confused by what it means to be a Third Culture Kid understand both the hardships, as well as the joys of this kind of life."

"Funny, dramatic, passionate, heartbreaking, and engaging...Alien Citizen: An Earth Odyssey is as mind-engaging and heart-touching as solo performances get, and with Liang’s one-woman show now available for worldwide home-and-school viewing, its informative, inspiring journey has only just begun."

"There are times when you’re about to fall off your chair laughing, only to find yourself tearing up in the next scene. She tells it all, the privileged and exciting, but also the challenging and frustrating sides of growing up as a TCK, having to move and leave behind one life, only to have to adapt to a new one, again and again. Every TCK can relate to her story, which she tells so vividly with her amazing acting, that you feel like you were almost there with her in that memory...honest and raw, hilarious and heartbreaking...I invite all TCKs and their parents to watch Elizabeth Liang’s breathtaking performance in her show Alien Citizen, which will help you recognize, relate to, and understand some things that TCK’s experience growing up."

"It’ll make you laugh, cry, yell 'HELL YES!' at the screen...Elizabeth’s linguistic skills and ability to mimic accents and mannerisms brings the colourful characters to life...As so much of the piece resonated with me, as it will for many migrants, I found myself wishing all my friends and family who struggle to understand my lifestyle would also watch it and understand me better...In Elizabeth’s audience we get a sense of belonging, of feeling non-alien."

"I was riveted...Liang allows us inside her struggles and triumphs and brings them full circle in a way that helped me more fully understand mine. By being real about the pains, she freed me to experience the joys in the rich, nuanced way that is real life...I loved how Liang took the freedom to break into Spanish or Arabic during her story...By using all her languages in “Alien Citizen,” Liang brings closer the people who can follow her and also envelops the stragglers, carrying them over the hump into something more—a world where we are not just different but also the same, one where tone and gesture speak as loudly as vocabulary...I could go on for pages about the things I related to in Liang’s show...But I don’t want to rob you of the experience of watching it and seeing what you, global nomad or not, might relate to, too. Because we’re all a little alien sometimes, no matter where we come from or where we’re living right now...From Liang I learned about who I was, am, and want to be. And I’m grateful."

-Isla McKetta, A Geography of Reading

"Her stories are rich and funny and painful and heartbreaking. And while they’re unique to her, they will resonate with others who understand the significance of such terms as 'home base-ish' and 'transition fatigue' and 'foreign school'....In Alien Citizen, Liang gives a vivid, outside-in view of the places where she’s lived, where the mundane becomes exotic and the exotic mundane. There’s drumming on turtle shells during Christmas celebrations in Guatemala, walking barefoot across the road to buy orange Fanta in Panama, wind surfing in Morocco, and riding in a car spinning on the ice in Fairfield County, Connecticut. It’s because she’s given herself 'permission to speak of the pain' that she can be grateful for all the wonderful things she’s experienced. And through Alien Citizen, we get to experience it all, too."

"Once again, we experienced the power of storytelling for creating awareness, healing through sharing, and revealing what still needs first aid...she stokes laughter of recognition from the innards of her audience...she offers something that others can somehow relate to in their own stories and start to accept with a chuckle...Liang explores her story with force of fact and confession of impact but does not whine or blame. Rather her performance is powered by an empathetic ownership for her past that connects her with her audience."

"Alien Citizen is a must watch. Wish it could be seen around the world...From one TCK to another - Thank you."

"A fantastic, thought-provoking, hilarious, poignant performance, screening and discussion...Your voice is much-needed and much-appreciated by members of the mixed race and third-culture communities."

"It is so incredibly moving. Such a great resource for trainings and classroom discussions about important topics of identity, belonging, and being a global and multiethnic person."

"It spoke to us on many levels. The timing couldn’t be better. I’m on the cusp of my next assignment overseas and we don’t know how to tell our daughter we’ll be moving… But one very important new thing Alien Citizen helped realize: don’t force our daughter to suppress her feelings to reinforce my glass-half-full outlook... Thank you again."

"Profound and extraordinary and wonderful—like being swooped into deep space. We were carried away."

"Seeing Elizabeth Liang perform her story of growing up global was not just moving, but illuminating... That so many without exactly Ms. Liang’s experiences walked away feeling that they had for the first time seen part of themselves on the stage indicates Ms. Liang’s skill in making her unique experiences universal... Her comic timing, flair for the telling detail, massive range of emotive ability, and willingness to wrench open the wounds we all have are what first strike the viewer. But what remains is the knowledge that we gain from all great art: we are not alone."

"What an engaging, poignant and entertaining show! What a delicious, fulfilling evening of theatre! How refreshing your voice is, how interesting (even educational)."

I created ALIEN CITIZEN: An Earth Odyssey because I got tired of being asked if I was from the Midwestern USA, which made me feel like my life had never happened. Like people couldn't see me. Also, my brother John told me of a call for essays about growing up in different countries. I wrote one about creating a solo show about my intercultural upbringing...which forced me to create the solo show I had been pondering. (The essay was published in the anthology Writing Out of Limbo.)

ALIEN CITIZEN: An Earth Odyssey was created over the course of several years, via the essay and in classes, workshops, and on my own. I wrote and improvised scenes from my life, then revised them numerous times. My director, Sofie Calderon, also worked as dramaturge and made the script tighter for the world premiere. Her direction guided me to perform with courage, and she gave the stage and film productions real dynamism. I'm also indebted to our film editor, Dan Lawrence, for making the movie a tight, compelling viewing, with special effects and more.

The stage play had its world premiere at the Asylum Lab in Hollywood, California in 2013. It has since toured the USA and world. The film had its world premiere at the SIETAR USA conference in San Diego, California in 2017. It had its US East Coast and European/International premieres at intercultural conferences, and it won its first film festival award at CICFF in India.