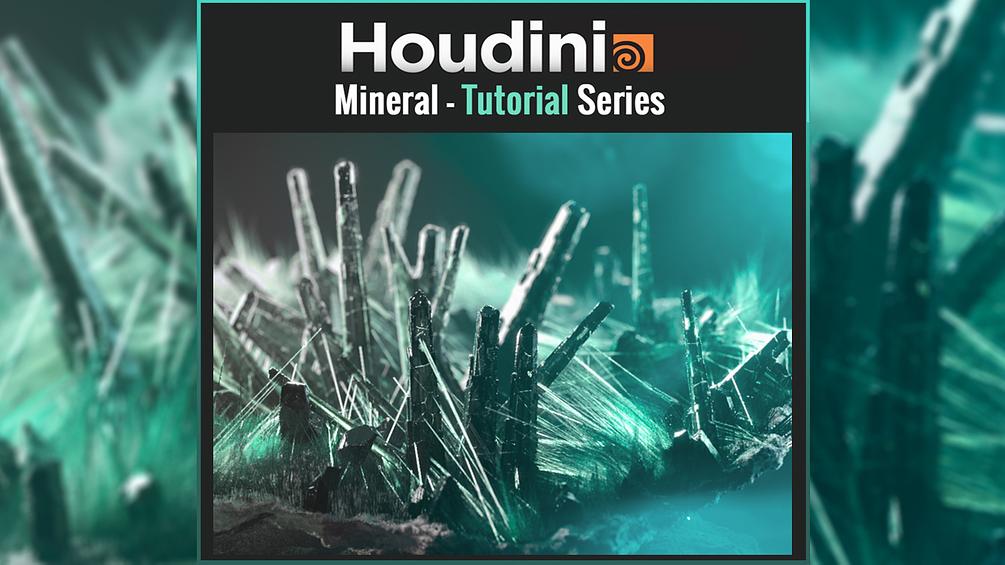 Showing in details the different steps to recreate my mineral experiment inside of Houdini 18 and Redshift 3 Include :

You can watch this part for free on my youtube channel to give you a good idea of what you can expect through this Houdini course.

Finishing the creation of the crystal by adding some internal structure and cracks over the surface. This will help later to give a sweet look once we will start shading.

Using primitives and polygon surface operators to generate a rock base on which we will scatter the crystals we created.

Using pointvop and some basic vex to setup some attributes that will drive the scattering of the crystals and fibers.

Using pointvop to setup the scale of the scattered crystals.

Using pointvop to setup the rotation of the scattered crystals.

Fixing crystal volume artefacts, creating different variations of crystals. Using pointvop and for each loop to assign different geometries into the scattered crystals.

Setting up a flexible and fast procedural way tor resolve the intersection generated into the highres scattered crystal.

Setting up the strands flowing along the crystals.

Setting up the strands connecting the rock to the crystals.

Setting up the main settings to generate and import custom guides to drive our hairgen fiber.

Creating attributes and masks to proceduraly drive the Hair system for the Malachite fibers.

Now that the whole setup is ready it's time to play with it and be creative to come up with a cool composition we could use to start lighting.

Models and composition is ready time to deal with lighting setup !

Giving the base rock the look it deserves with some displacement, SSS and subtle color variations. Full procedural shader using redshift networks.

Using redshift netword to create a procedural shader for our fibers and strands.

Preparing the final touches and settings to optimize the render of our final image with Redshift.

Preparing all the AOVs / render elements to have full control over the final image in compositing.

Compositing of the final render within nuke. Render included in the tutorial files.

View in Library
Sorry, this item is not available in your location.
Sold out, please go back and pick another option.
20
5.0