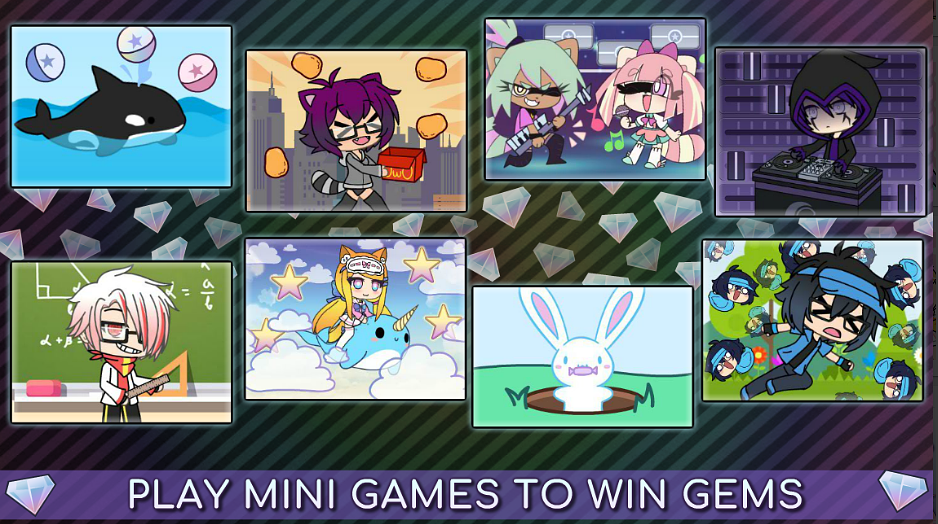 Gacha Life is a casual game for all ages. It also incorporates role-playing and simulation. It’s a dressing up game that kids would definitely love to play. So, let’s take a look into it from a parent’s perspective.

Let your young ones enhance their imagination and show their creativity when they play Gacha life. These cute anime characters are a thing of the younger generation and they get the chance to dress them up with the latest fashion. They can have as many as 20 characters because of the available character slots so they have a lot to do. They can customize several avatars with different clothes, shirts, hairstyles, weapons, and so much more.

Kids can choose from different backgrounds in the Studio and tell their own story by adding text to their characters. They can also visit various scenes in Gacha Life. When things get boring, they can play 8 mini-games and collect as many gems as they can. They can also chat with other players in the app. Life Mode enables them to create friendships by talking to game characters.

When stamina becomes low, kids can use their gems to get Gacha, which are typically gifts like an animal, shirt, or any other times that can give them the energy to continue playing. They can also send gifts to other players that will help them increase their friendship level.

Gacha Life is a good game for kids who love dressing up an avatar but they can get confused with the requirement of characters to maintain energy so they can play more. Overall, the game is a great way for kids to express themselves. However, both parents and kids should also be extra cautious. Some players with hideous agendas are using the skit builder to create inappropriate content and videos of the skit are posted online. Some users tend to promote dark and mature content when most of the players are still very young. Players can do whatever they want in the game that is intended for younger audiences. If you want to search for the game online, take extra care, especially if you are using YouTube.

Parental supervision is very much needed when kids play the game. The app will give players a platform to help them hone their creativity and imagination so it is up to them on how they will use it. It is also every parent’s responsibility to help and guide their kids who are still very vulnerable to seeing inappropriate things in their favorite game.

Mini-games are one of the features of Gacha Life. There are 8 games to play so players can earn gems that they can use to make useful purchases as they go along. Some of the games give you fun and excitement like when players catch the nuggets that are falling from the sky. However, there are other games that run very fast or are actually very short to play. For instance, the game of giving candy to a rabbit that pops out of the hole will only last for 10 seconds, literally.

In the game of Gacha Life, players enter into the Studio once they are done personalizing and customizing their chosen avatars. They get to choose different backgrounds and text to their characters to create their own story using the Skit Maker. They can even combine multiple scenes to create sketches. Then they can choose the Life mode where they get to explore different areas, such as towns, schools, and more. Although it is fairly easy to figure out how to move from one world to another, it is not clear what you are going to do in every location or how to move on to the next level.

Another feature of the game is that players can chat with NPCs in various locations and talk to them to get to know them more. Also, users can interact with other players and give gifts to other characters in order to increase their friendship level. However, every action has a corresponding cost on the stamina points. That is why if you want to move forward with friends, you have to sacrifice your stamina points because you will lose your energy with every friendship action.

Additionally, Gacha Life is also about losing more and more stamina. Even if you still want to play, you don’t have enough energy to advance further into the game. You also need to buy more Gacha and gifts that you will give away. When you run out of stamina again, you need to play more games, watch an ad, or buy more gems using real-world money so you can work toward another friendship level. If you are one player that easily loses patience because of waiting for too long, you just can’t stand gameplay that slows down.

Lastly, the game requires parental supervision because it is a target of dark, mature, and malicious content. Since the game is intended for younger audiences, it needs extra caution and parents should be responsible for how their kids play the game. Developers might want to remove some character poses that can be used to create sexual and mature content.