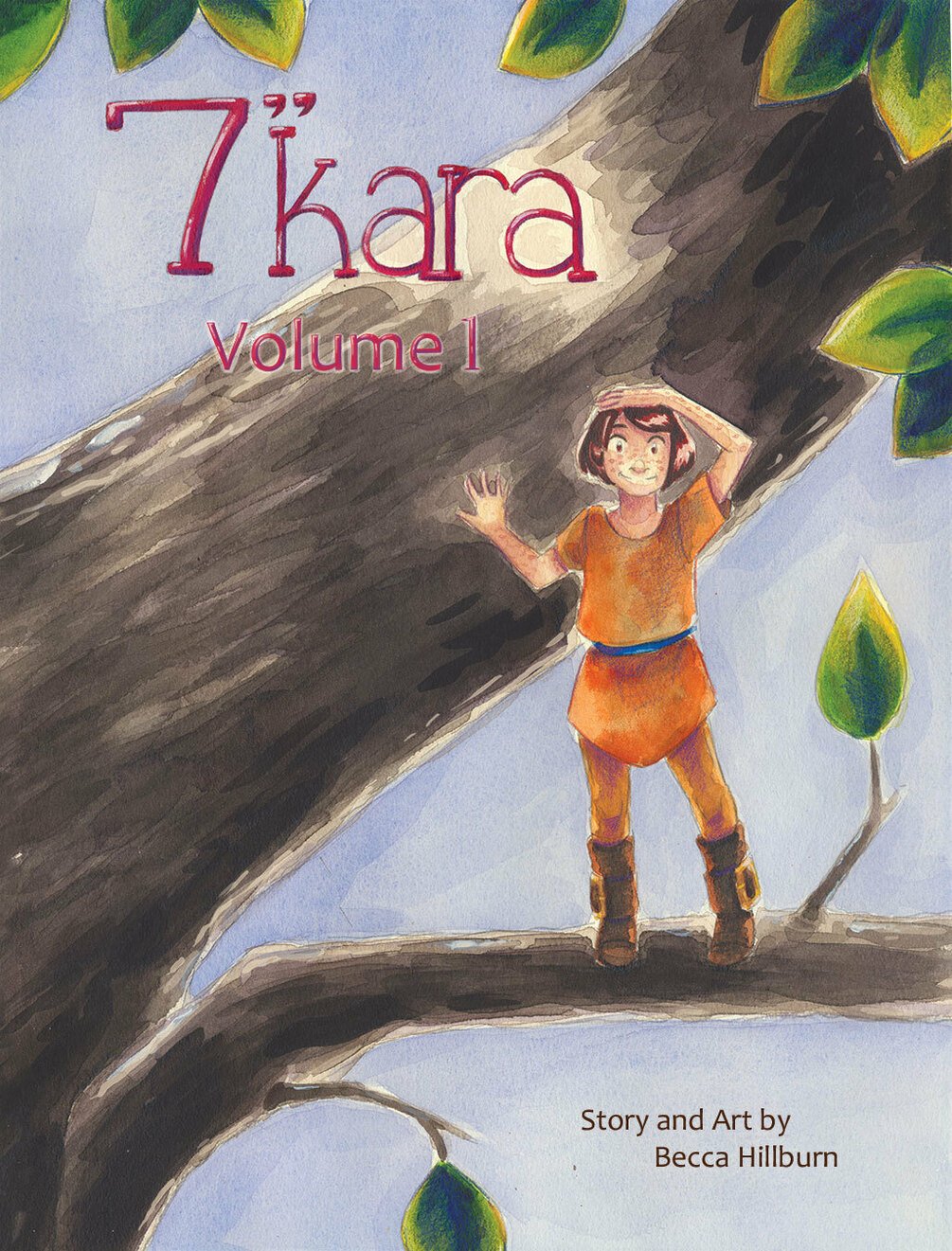 7" Kara is an all ages watercolor adventure comic the whole family can enjoy together. Follow Kara, a 7 inch tall girl, as she make friends and discovers that humans are more than just tall tales. You can follow the series as a webcomic as well.

Lilliputians are tiny people who occupy the in-between spaces of our world. Sometimes, if you're careful, you can catch a glimpse of one. 7" Kara is a suburban fantasy comic aimed at young girls. Inspired by books such as "The Borrowers", "The Littles", and "Gulliver's Travels", 7" Kara follows the adventures of the 11 year old Lilliputian Kara. Kara lives with her parents in an old doll house that's been hidden away in the back of a neglected shed. Isolated her entire life, she has few Lilliputian friends her own age, and even less experience with the outside world. Everything she knows has been learned first hand or has been taught to her by her parents. Her life changes drastically when a human family moves into the house her family lives near. Will Kara make a new friend? Or is there something darker, possibly more dangerous in store for her?

Inspired by traditional children's books and novels, 7" Kara is a 3 volume series that goes beyond the issues explored in stories like The Borrowers and The Littles. Each page of the main story is traditionally painted in watercolor to best capture the nostalgic feeling older children's books convey. Volume 1 sets up a story most readers are already familiar with: miniature girl goes exploring, makes friends with humans. One parent is complicit, the other is against her adventures. In Kara's case, one parent would be horrified if he knew what she was doing. Volume 2 will begin turning the well known tale on its head, exploring the dynamic between Kara's parents, Rowan and Meldina as a couple, as well as Kara's dynamic with her parents as individuals, and her growing desire for independence. This desire is expressed through her growing friendship with Naomi, her human friend, and the choices Kara makes under Naomi's influence. Volume 3 will focus on the affect these choices have on Kara, her family, and Naomi. Volume 2 is slated to debut in Fall 2016.

The overarching theme of 7" Kara is the dynamic between the weak and the strong- specifically how even the best of intentions can go awry when forced upon someone unwilling. 7" Kara is a coming of age story- Kara must decide for herself what's right for her- a life being cared for by humans, a life lived side by side with humans, or a life far away from humans. It's a story of loss, as Rowan comes to grips with his daughter growing up, and his inevitably having to let her go. And it's also a story of self-discovery, as Naomi must come to terms the jarring realization that although her intentions are good, she is still forcing her will upon Kara.

Please check out my 7" Kara tag on Tumblr for pages in progress as well as book announcements.

Collected in this first volume are the first four chapters of the main comic, a bonus story featuring Kara, and a selection of concept art. Full color, 112 pages of content, 71 pages of comic.

Reviews and occasional giveaways are available on the 7" Kara GoodReads page! If you've already purchased the book, a review would be greatly appreciated.

The physical volume comes with a wooden Kara charm and can be had for $15.