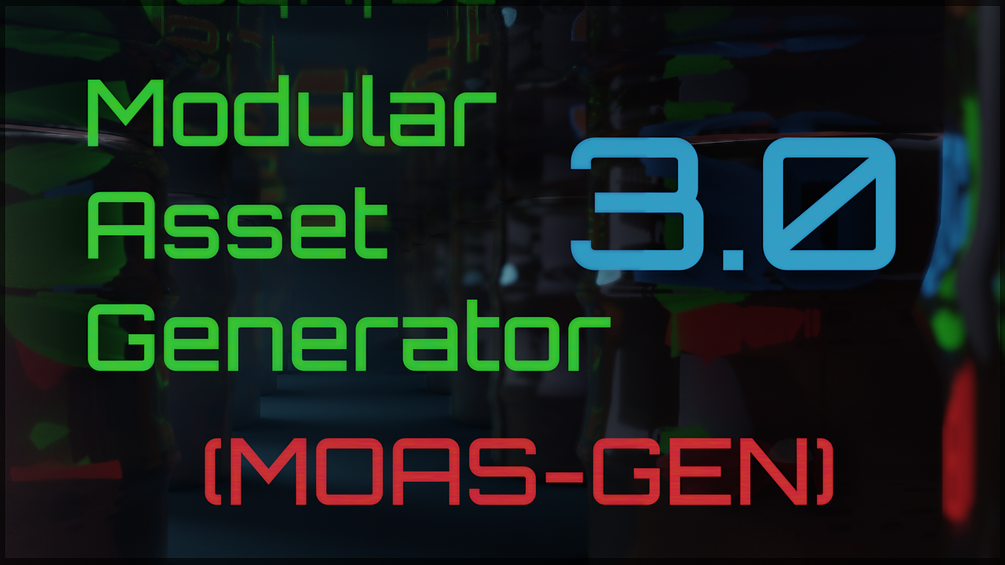 What is the MOAS-GEN addon?

MOAS-GEN generates MOdular ASsets (MOAS) from profiles. First it creates more than 30 parts from profiles. Then these parts can be combined to create MOdular ASsets. The MOAS-GEN has now all features I had in mind initially. Therefore the addon is now out of pre-release.

The price will increase to max $20,- once all is finished.

Installation of the MOAS-GEN addon is like most other addons. Go to Edit > Preferences > Addons and navigate to the .zip file you just downloaded. Then activate the addon, save preferences and refresh. You will find the addon in the N-Panel under tab MOAS. Click on one of the profile sets. This will import profiles, a boolean, and some extra base meshes. Next, you click on Create Parts. Wait around 7 seconds, and it will create parts.

Tutorial for the latest version 2.0.5:

You can also load the basic profile set and then go in Edit mode to adjust the profile to your needs. You can assign different materials if you want. Check the other presets to get an impression of what you can do with profiles. What I use a lot in Edit mode to edit the profiles are the following shortcuts:

And when parts are generated, best is to use absolute grid snapping. If you use Alt+D, then instances wil be made and barely takes any RAM memory. I use often: Alt+D, Shift+Z, so I can stay in User Perspective. Parts will then stay on the same Z-level and snap on the grid.

After making many parts for the "Assets for Level Builder", I decided it's time to automate the process. It took to many hours making assets. At first I wrote a script, that was like a bunch of macro's. That created parts from profiles. Then I wanted to have a library of profiles, and so I made added a few profile with a thumbnail viewer. In the current state, we can now generate more than 180 modular parts and if you work with custom profiles unlimited.

So idea's are inspired by the benefits of the Level Builder addon. I learned from that how efficient it is to use instances.

The basic measurements are there for reasons: 2 meter wide, suitable for two persons. Standard height for ceilings is around 2.40m. So I used that height. But you can use any other standards. (As long as you have standards in mind and use then consitantly).

Later this week, a tutorial with tips will be uploaded.

- Added a function "Join Parts". With this you can join similar parts (that come from the same profile). What it does: a) Make all selected objects single user, b) goes in Edit mode and deletes doubles, c) removes interior faces.

This opens a few more doors for further finalizing the asset. You can also use this on other objects. Try it with a cube and you will see that you now can subdivide the object with artefacts. Some artefacts are otherwise caused by interior faces.

- Added a function "Edge2Bool-array". Select an object (part or asset) and go in Edit mode. Select an Edge loop. (You might want to use Ctrl+R first and then select part of the loop). For example like this:

So, don't select a whole closed loop. Then press the button "Edge2Bool-array". And the result will be as follows:

How to use it:

- Press G, X to move the boolean-array from left to right (Offset)

- Go in object mode to position the boolean on Z and to change the shape any way you like. Scale it in Edit mode instead of Object mode. This way you can apply it with consistency on other parts or assets.

- To make a bigger gap between the booleans, use the modifier stack, array modifier (relative Offset).

- Increase or decrease the amount of bools: use modifier stack, Count.

If you do it well, you can get consistant bools on other parts. Here an example:

Once done, apply the modifier and select the boolean object and remove the Array-, and Curve modifier. You can do the same procedure on another part. The workflow will be improved where possible in future update.

- Added a function "Edge2Curve". Same procedure as previous, but this will add an extruded curve. To rotate the extrusion, go in edit mode and press Ctrl+T, 90 (to rotate 90 degrees for example). Tip: you can add solidify modifier or other modifiers and then convert it mesh. In future update there will be some more controls.

- Added Count, Relative Offset and Location of the Edge2BoolArray:

- Added Offset, Extrudes, Thickness and Convert 2 Mesh for the Edge2Curve:

Added a new feature "Face2WeightPaint". Select a few faces (faceloop or few faces) in Edit mode, then press the button Face2WeightPaint. That will bring you into Weight Paint. Left click then drag the mouse to and that will add a gradient Weight paint. Go in Object mode, and you will see settings for Thickness, Factor and Offset. Once done with the settings, click the Finalize button so you can use this tool again on same or other objects.

Added a new (experimental) feature: Face 2 Softbody. There are two steps: 1) Go in Edit mode, select some faces and press Face2SoftBody. This will bring you into Weight Paint mode. Drag the mouse (mind you can use linear or radial gradient type). Go out of Edit mode. 2) Press Add Softbody. This will add a softbody with best settings for situations like this and plays the timeline.

Tips: a) Experiment with the forcefields: Vortex, Turbulence, Force, Wind, Harmonic. b) You can use simple collision objects that have thickness, like spere, cylcinder etc.

Note that this is quite an experimental feature that needs some evolution, trials, feedback etc. Tutorial will follow in a week.

Finished with the part that generates assets from parts. So now, the addon has all features I had initially in mind. Therefore the addon is out of pre-release, but expect some update for the UI, and functions to manage and organize assets. I added another thumbnail previewer that shows asset presets. When you click the convert button, the asset will be updated with parts that are in the scene. So first, select or make a profile, generate parts, then generate asset.

You can edit and finalize the generated asset with the tools provided (like face2wieghtpaint) or 3th party tools like Decal Machine. Then select all the objects in the Asset collection in the Outliner, and move it to another collection. A tutorial will follow later.

Bugfix: Some profiles were slightly out of symmetry. Result was that when you turn a part 180 degrees, it was not join-able. This has now been fixed. All the profiles are now snapp-able in 0 or 180 degrees. Don't forget though, to press convert Asset after loading an asset preset.

Uploaded a version of MOAS-GEN for Blender 2.9. Filename is MOASv301_BL290.zip