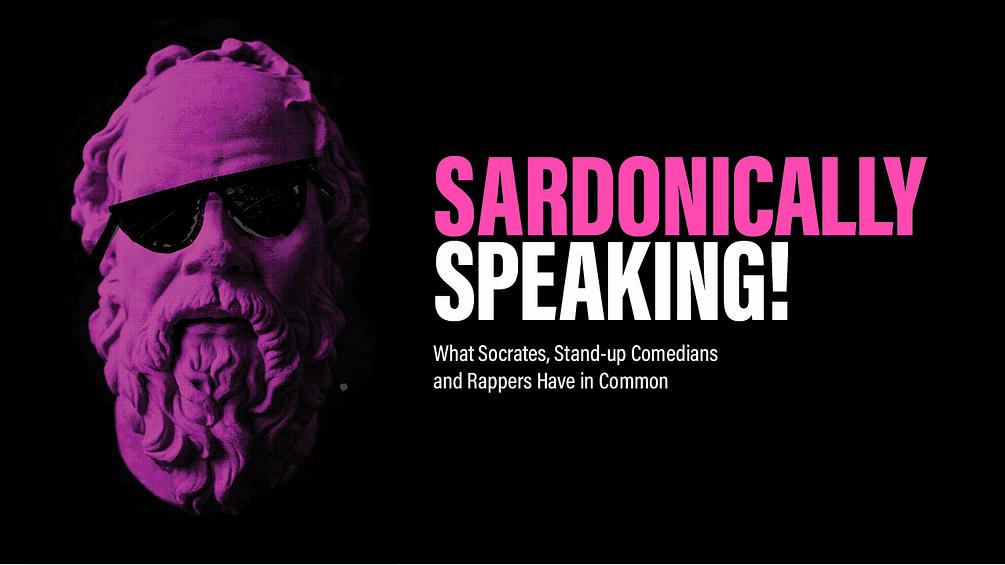 Sardonically Speaking: What Socrates, Standup Comedians, and Rappers Have in Common

I wrote a short ebook called Sardonically Speaking. I don't know what it's about. If you're not interested in finding out, you can download it and NOT read it for free.

Some social media platforms have augmented an inimical dynamic by transforming the forum from a place where we are exposed to a mosaic of worldviews, to a place ripe for the emergence of an evolved kind of witch-hunting. Now people jump on the bandwagon of persecution to ensure that anyone who so much as dares to think differently is canceled, de-platformed, and even fired from their job.

We are living in times of collective paranoia and narcissism. Mass anger is spilling over from digital media to real life. People across the globe are being categorized by their identity, race, political affiliations, and so on.

The antidote to this is to change our mindset, to adopt a sardonic approach towards ourselves and others. No one cares about what we think.

This is a book about philosophy in the marketplace. It will get you to think about the importance of not taking things all too seriously, the need to chill-back in your quest for a ‘good’ life, and why it is essential that we occasionally challenge, and laugh at ourselves. The chapters are organized in several interrelated but stand-alone essays, making it easier for you to jump back and forth between them at your convenience.

The main premise of my project is that real philosophers are ones who question the status quo of any system, in addition to collective and social norms and traditions that are passed on through generations without being properly contested.

In light of that, I think that standup comedians and rappers are more contemporary philosophers than academic philosophy professors.

My name is Mahmoud Rasmi. I have a PhD in Philosophy from the University of Salamanca, Spain. I quit my academic job to take philosophy back to the marketplace. Between 2013 and 2020, I taught philosophy and cultural studies at the American University of Beirut and the Lebanese American University. Now, I have decided to venture to the virtual world in order to give affordable classes online to people who are interested in studying philosophy in a non-academic setting.

A retweet is not an endorsement

Tricksters as disruptors of the system

May Zeus be with you

Professors want to publish, but no one reads them!

Don’t suit up, Whimsical bosses who are too serious

Diogenes eats raw food, and lives in a barrel

Paul Feyerabend gives a class under a tree

The fountain of disruptive knowledge

Amy Schumer doesn’t give a fuck what you think, what would Mark Manson say?

Nikki Glaser talks about sex, and Joe Rogan decides to write a book

Challenging our beliefs brought to you by Bryan Magee

A DecafQuest philosophy: How I transferred my anger into a creative opportunity

"Finished "Sardonically Speaking" by Mahmoud Rasmi (@Decafquest). A very important and meaningful book. My take from it personally was that I'm probably too serious in religious discussions and have been wasting a lot of time on "abstractive hippies"." - Sobalaan (@Sobalaan)

"Thoroughly enjoyed this book by @Decafquest. Read if you want a laid-back explanation of the attitude that makes someone a real philosopher from the ancients to the '90s rappers (and will very likely relate to many things you are fed up with). - Jack Robinson (@_jackcrobinson)

"How to pick a book: if abstractive hippies enjoy it, then it's probably not the read you need. This book is a laid-back discussion between you & @Decafquest who learned from Academia [his disappointing experience with academia] to create his own opportunities and to simply not give a F." - Romy (@romytweeting)

"My conflict-management coach told me that this is the key to conflict management. Except that I paid her 500€ to tell me something that would have cost me 15$ if I have read @Decafquest's book before." - Le Rossignol السفستك (@Le_Rossignol)

"Pragmatic, transparent, enjoyable, handful of loud laughs, one of those reads that can find you at the right time." - crypto_coop (@1eclecticism)

"As a lover of philosophy, sometimes you feel the heavyweight of the seriousness and academic path this field has taken. This book takes that weight off. In a light and sarcastic way, Sardonically Speaking tackles philosophy, modernity, and social issues, eloquently packaged. Philosophy doesn’t have to be serious, and it’s time we keep up with the times we are living in. I highly highly recommend this book, as it was a delight to stir away from the academic bubble, and have a look at philosophy from a different perspective, one that we can relate to. And who can we relate to more than rappers and stand-up comedians? Brilliant book and hoping for future publications." - Sandra Fournouzlian

"I just finished reading Sardonically Speaking and it was a good read with a healthy dose of sarcasm and irony. I liked how you explained the immense online rage of online warriors which has nothing to do with their personalities or lifestyle. Well done and keep writing!"- Roman Loban (@LobanRoman)

"Thank you @Decafquest for "Sardonically Speaking". I expected highfalutin (yes, on purpose) philosophical jargon and instead, got a light read with lunch. Love it." - R.K (@leb_obs)

View in Library
Sorry, this item is not available in your location.
Sold out, please go back and pick another option.
8
5.0

Thank you for your purchase!