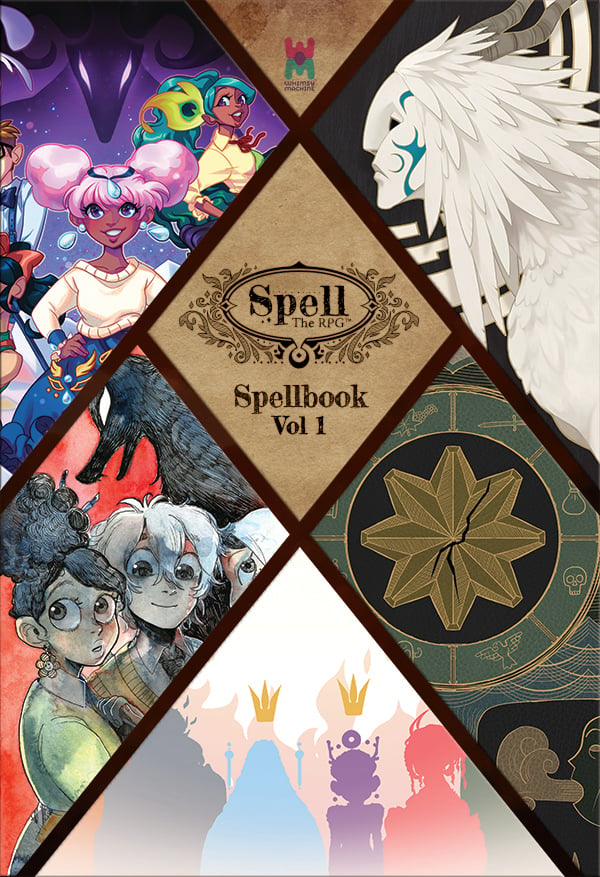 Spellbook Vol. 1 is a collection of five campaign stories. Each chapter presents a unique plot and setting that can be played as an ongoing campaign or a single session with the option of continuing. The chapters represent a variety of settings and stories, but also moods and play styles to match your particular gaming group. Each chapter is fully illustrated with black and white art throughout and is designed with convenient in-line sections on how to alter or expand given stages of the story.

The realm of Gultera is kept safe under the protection of the Sky: A magical ceiling that holds back the chaotic power of the gods who live in the stars. The Sky is cracking and it’s up to a party of Starborn, the heretical inheritors of Gods’ whispered magic, to travel to the sacred mountain Skymouth to restore the Sky—and discover the ancient secrets the Skymouth holds. Illustrations by Carlos Aon and Jok.

The Godqueen is the one who brought order to chaos and structure to civilization. Her rule was benevolent and her word was Law. Over time, the rulership was too much for one individual, so she dissipated her essence into a pantheon of children. Through generations, they must manage the largest catastrophes down to the most minute of heartbreaks. In them is the gift of the Godqueen: Their word is Law. Illustrations by Leland Goodman.

High school is hard enough when you don’t have to also learn how to use this weird, reality-altering magic you never asked for. Now you have to plan a school dance so the other kids don’t think you’re so weird? The only thing worse’d be if a sinister-looking administrator starting snooping around or if a monster showed up! So, of course, both those things happen. Illustrations by Kuropin.

The city has an underbelly and so too does the waking world. Lucid dreamers practice skillful conjurations in Reverie, the dimensions of dreams. It’s all fun and games—and the occasional mercenary mission—until an inhabitant of Reverie begins to exert control over the waking world. Act fast! The lines between waking reality and dreams is beginning to blur. Illustrations by Fusspot.