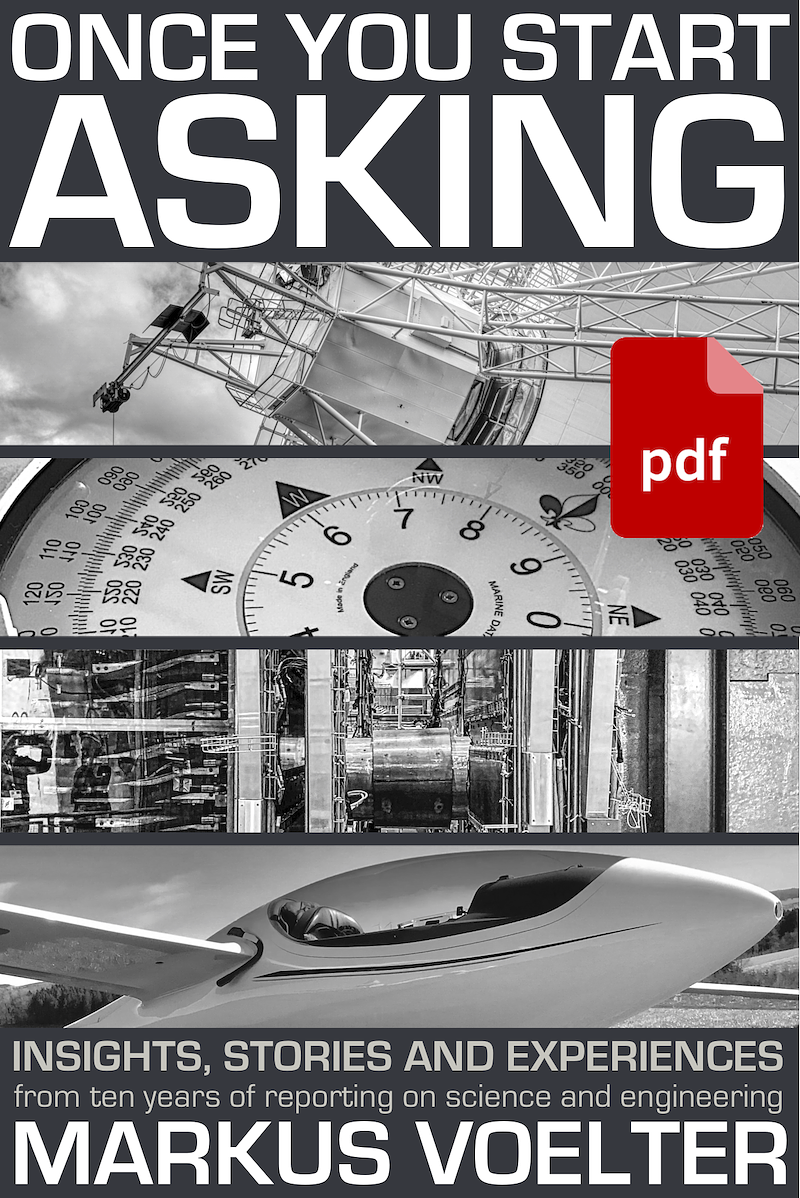 Once You Start Asking - Insights, stories and experiences from ten years of reporting on science and engineering [PDF Edition]

[PDF Edition] Check out http://onceyoustartasking.com for other versions.

Follow Markus into the cockpits of a glider over the Swiss Alps and of a fighter jet over Indiana, onto the bridge of a Royal Navy survey ship, to the largest optical telescope on Earth with the Milky Way reflecting on its two huge mirrors, to a non-descript field in the middle of Germany that hosts an ultra-sensitive gravitational wave detector, and into a mysterious world beneath Geneva that houses the World's largest particle accelerator and the detectors that observe the collisions of elementary particles to probe into the building blocks of our Universe.

But this book is not just a collection of personal adventures of the author -- only the first two chapters on SOFIA and HMS Enterprise are. Instead it covers, in detail, a number of topics that Markus has repeatedly covered in over ten years of recording episodes for the omega tau podcast: aviation and aerospace engineering, astronomy and telescopes, particle physics and large-scale physics experiments as well as models and modeling languages. With 220,000 words, over 150 illustrations and a couple dozen formulas, Markus explains the engineering of the marvelous machines that power modern science.

So how do you control a 17-ton telescope mounted on a 747, and why would you want to do that in the first place? How do multibeam sonars map the sea floor? How can modern gliders fly 100s of kilometers, and why do they take water ballast to do it? How can the SR-71 fly at Mach 3 at 80,000 feet? How do computers reliably control an A320 and why is it so hard to fly a helicopter? How do you build mirrors with surface roughness on the order of micrometers? How do you computationally combine 66 radio dishes into one big interferometer, and how do you combine antennas all over the World to observe a black hole? How do you insolate a detector so well from its environment that it can measure gravitational waves? How do you control the hair-width beam of the LHC to produce millions of particle collisions per second, in order to replicate the state of matter just after the Big Bang? How does a physicist analyse the data produced by ATLAS and CMS to "see" previously unknown particles like the Higgs boson? And what role do models play in all of this?

If you've asked yourself any of these questions, this book is for you.

Check out http://onceyoustartasking.com for details, tables of contents and pictures.