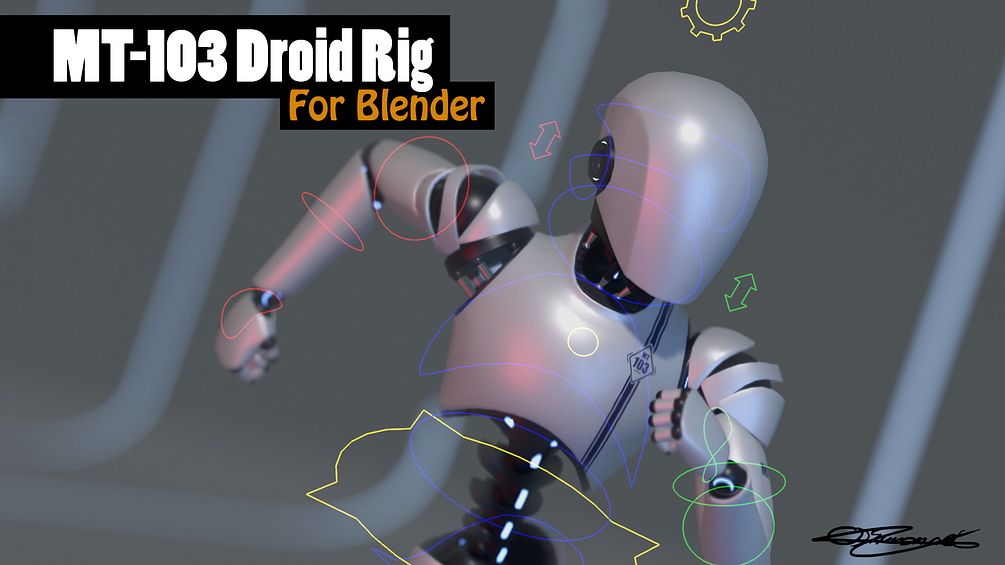 If you think I should create more rigs, feel free to buy me a drink! Every little helps :)

A robotic character rig to use as you please.

Please try and remember to give credit if used.

Change Control Notes - "And this is why I needed people to test it for me! :)"

IMPROVED: GPU consumption by disabling the subd and armature modifiers on this hidden "main" mesh whilst in proxy mode. Although proxy mode hid the HD mesh and showed the low rez proxy, improving performance, the armature and subd calculations were still constantly being performed against the hidden main mesh in the background, impacting performance.

ALTERED: Scene Collections (again) to [even] better aid Linking into other projects without having duplicate rig overlays.

ALTERED: Enabled the proxy mesh by default (_PROXY = 1) as the high rez model will show in renders anyway - no need to toggle before rendering.

ADDED: Anchor points on the hands (shared between Ik and FK) where you can parent / pin objects

ALTERED: Scene Collections to make it even cleaner to link into larger projects

FIXED: Render issues. Rendering of the animation masks was enabled on the objects. This has been disabled to resolve the rendering issue.

FIXED: IK / FK Blending issue. Blend was fine, but blending bones seem to have become detached from one another (though still parented). Fixed so the leg and arm forms are maintained during blending.

FIXED: Additional issue with Head tracking - specifically. These issues were due to the mixture of world and local space constraints and the layering of custom properties. (such as follow/track/FK).

FIXED: Shoulder armor deformation. Previously did not deform properly when in IK mode

FIXED: Rig_UI cleaned up a bit. Flipped left and right.